If you were around the Makerspace pre-COVID, you may remember the multitude of workshops we offered. They were small seminars held by our very own staff and could include anything from soldering to lock-picking. Amidst a pandemic, however, these seminars became less feasible, so the Makerspace came up with a solution to keep providing quality hands-on learning: Maker Groups. 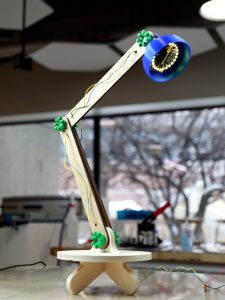 Conceptually, Maker Groups aren’t all that different from the workshops we offered previously. They are still staff-held seminars designed to provide hands-on learning. What separates them is scope. Unlike the one-time, one-hour workshops, Maker Groups are a series of seminars held every week for around eight weeks. And while the workshops typically focused on just one thing, Maker Groups used a variety of skills and machinery during its course.

A perfect example of the process is the Ugly Lamp Maker Group. Over eight weeks, students were tasked with building a lamp from scratch. They designed the lamp in CAD, cut out the wooden base parts using a CNC router, formed the arms using the laser cutter, 3D printed the lampshade and knobs, and finally did some electrical work to power the thing up.

Other Maker Groups included designing and routing a CNC chair, building your own Arduino (sponsored by Digi-Key), and designing a custom electric heat jacket to keep you warm all winter long.

As you can imagine, projects like this are a great tool for introducing students to a wide variety of fabrication techniques they may not have been familiar with beforehand. So much so that the Makerspace is even considering using Maker Groups as training for new employees in the future.

For now, though, all our current Maker Groups have been wrapped up. According to one of the instructors and Makerspace shop manager Karl Williamson, things went off without a hitch. Students had nearly perfect attendance, and the program attracted a wide variety of students whose experience levels ran the gamut.

So when are Maker Groups returning? As of now, we don’t know. Because it’s a good introduction to the basics of the Makerspace, the Ugly Lamp Maker Group will be incorporated into the Inter477 curriculum, but anything beyond that is still on the table. However, you can rest assured that the UW Makerspace is always looking for new ways to increase hands-on learning, so you never know what is on the horizon.